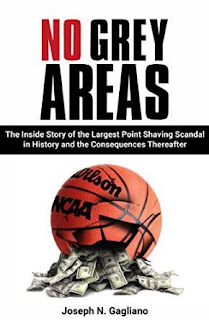 “No Grey Areas is compelling memoir of Joseph N. Gagliano who orchestrated one of the largest shaving scandals in sports history. Within the pages readers will get a backstage pass into Joe’s personal story of greed, the consequences and his harrowing ride to redemption.”    https://walkerputsche.wordpress.com/
Before I read this book I had very little knowledge about the shaving scandal of 1994 and the sports gambling industry. Gagliano recounts and shares his story through a first-person narrative which is brutally honest and easy to follow, from the onset of the scandal to the devastating aftermath and how his life changed forever after it.
To be honest, I am not really a sports enthusiast but I was impressed by this book, it is well-written, compelling and an honest confession of a man who made some really poor choices when his fortune disappeared through “grey areas” of selfishness, greed, scandal and corruption.  Galliano’s unique and excruciating journey to atonement is inspirational and I would highly recommend it readers who enjoy memoirs about the sports industry.
Disclosure: I received this book free from The Cadence Group in exchange for an honest review. This does not affect my opinion of the book or the content of my review.
My Ranking: 4.5 Stars
Posted by Unknown at 07:06 2 comments: 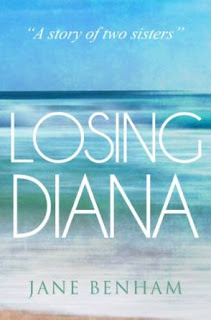 “Losing Diana is a raw memoir and deeply moving account of one woman’s heartbreaking journey with her sister who is diagnosed with motor neurone disease and frontal lobe dementia.”  https://walkerputsche.wordpress.com/

Benham shares her unique journey through a first person narrative during one of the most challenging transitions in her life, through moments of grief, despair, heartache, hope and loss.  Losing Diana is a deeply moving story of the strong bond between two sisters when one sister is diagnosed with an incurable disease.  I am deeply moved by the author’s raw, authentic and riveting voice as it made me cry and think about my mortality.

The Victim: By Eric Matheny 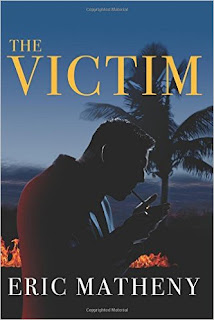 
“Matheny has the unique ability to walk the reader through the rigorous steps of a criminal case from the initial arrest through to the trial process in his tense psychological legal thriller, The Victim.” https://walkerputsche.wordpress.com/

The story opens eleven years earlier as a young and reckless Anton Mackey makes a life changing decision to get behind the wheel of a car after consuming a large amount of whiskey. Instead of doing the right thing and reporting his horrifying crime to the authorities, he decides to destroy the evidence and walk away, unaware that his mistake will come back to haunt ten years later when he takes on a complex case that is tied up to his past.
The Victim is a gritty standalone legal thriller featuring well-developed characters, intricate and melodramatic plot lines that I found absolutely riveting from start to finish.
Disclosure: I received this book free from the author in exchange for an honest review. This does not affect my opinion of the book or the content of my review. 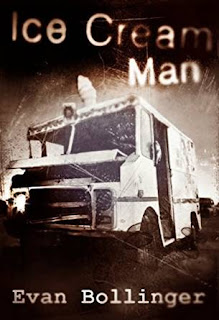 “Bollinger constructs a plot similar to a jigsaw puzzle with thousands of pieces that eventually all come together towards the end in a way I never imagined.” https://walkerputsche.wordpress.com/

The story follows main protagonist, Lacy Stamford, a single mum who is trying hard to keep her life and the life of her children on track after the death of her husband several years ago.  All of a sudden Lacy's life is thrown into turmoil when she returns from a simple shopping errand to discover her house is on fire and that this is just the start of the horror she and her children will face in the coming days of the unexplainable house fires, hotter than hot temperatures, spontaneous combustion and people going missing.

Ice Cream Man is a taunt thriller that is infused with horror and sci-fi elements and I would recommend it to readers who enjoy dark themed and thought-provoking fiction.
My Ranking: 5 Stars
Posted by Unknown at 00:41 No comments:

The Theseus Paradox is a stunning début novel. Don’t forget to grab your copy this weekend. 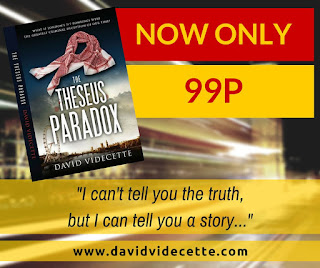 "The Theseus Paradox is a stunning début novel, intelligent and fluently written with an exciting plot. I simply couldn’t put it down in fear I would miss something crucial."
https://walkerputsche.wordpress.com/
Posted by Unknown at 07:10 No comments:

The Camellia Resistance: By A.R. Williams

The Camellia Resistance is set in a dystopian future where the USA has become an eroding wasteland after a major pandemic broke out (Herpes) and killed off a large proportion of the population. The Ministry of Health and the Ministry of Security are the new government and now rule the smaller population, with the exception of Texas, that remains independent. Willow Carlyle, works for the Ministry and is fast becoming a rising star, as she has spent the majority of her adulthood tracking the spread of sexually transmitted viruses and their impact on the population, until a night of passion with a handsome stranger changes the outcome of her future. Willow is diagnosed with Herpes and is instantly dismissed from the Ministry and struggles to make sense of her undoing until an unexpected encounter with a member from a resistance group, The Camellias (who live outside the Ministry and its strict approved health regulations) expose Willow to an alternative way of life she had no idea existed.  Along the way Willow discovers her real identity and a secret that will shake the Ministry to its very foundation.

Williams introduces the reader to some memorable characters, all of which are conflicted with their own issues to a certain degree.  The narrative is well written and captures the characters hope, fear and anticipation all at the same time, while provoking the reader to finish the first instalment and start the next one immediately. I look forward to the second instalment.
My Ranking: 4.5 Stars
Posted by Unknown at 05:44 No comments:

Promote your Page too